Metsovo (Greek: Μέτσοβο) is a town in Epirus, in the mountains of Pindus in northern Greece, between Ioannina to the north and Meteora to the south.

The largest centre of Aromanian life in Greece, Metsovo is a large regional hub for several small villages and settlements in the Pindus region, and it features many shops, schools, offices, services, museums, and galleries. The economy of Metsovo is dominated by agriculture and tourism, the latter of which flourishes in winter.

Metsovo is served by Greek National Road 6 (Ioannina – Trikala) and by the Egnatia Odos motorway. 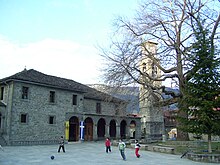 The church of Agia Paraskevi. 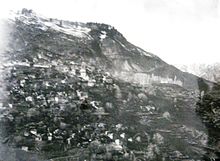 Panorama of the village Metsovo, 1899. Photo from the Manaki Brothers (Damaged glass plate)

In the 15th century Metsovo came under Ottoman rule and became part of the Sanjak of Ioannina. Throughout the late period of Ottoman rule (18th century-1913) the Greek and Aromanian population of the region (Northern Pindus) suffered from Albanian raiders. On one occasion, during the local Greek revolt of 1854, the town was plundered by both Ottoman troops and the men of Theodoros Grivas, a former general in the Greek military, during their struggle for control of the town. During the First Balkan War, Metsovo was burnt by raiding bands. In the last 10 days of October 1912, military volunteers from Crete, together with about 340 soldiers of the tactical Greek army under the command of Lieutenant Colonel Mitsas, advanced through Thessaly to the then Greek-Turkish border along the mountains east of Metsovo. On October 31, 1912, the Greek troops assisted by rebel groups from Epirus and volunteers from Metsovo, having crossed the Katara-Zygos mountain ridge overnight, attacked the Turkish garrison of Metsovo, which then comprised 205 soldiers and two cannons. The battle lasted until 4 p.m. when the Ottoman soldiers inside the besieged Turkish garrison raised a white flag and surrendered.

Socially, the residents of Metsovo, up until the beginning of the 20th century, were divided into three classes: the “arhontzi” (arxondzɨ),[8] the “vinitsi” (vinitsɨ) and the “algi” (alɟi) or, mockingly, “gizari” (ɟizari). This socioeconomic stratification developed during the Ottoman occupation.

The arhontzi were the wealthiest part of society. Their revenues derived from wholesale and retail commercial activities. Although locally very powerful, they were not a closed group in terms of social mobility. Wealth gave anyone the right to climb up the social ladder to the next higher level, although such ascent often gave rise to serious conflicts.

The vinitsi comprised the middle and lower classes of the settlement that were not occupied in livestock breeding. It mostly included farmers, small business owners, technicians, mule drivers, and small-scale merchants. Despite the economic and professional diversification among the vinitsi, they saw themselves as a unified social class, which was evident in their social relations. For example, they would marry among themselves but never with members of the algi.

The algi were the class of traveling sheepherders, whose occupation was large-scale sheepherding, livestock breeding, as well as woodcarving. They had set rules regarding the social roles of their members, and a strict patriarchal structure that governed their class.

Distinctions between vinitsi and algi

The social differences between the two lower classes were not based on income criteria but on the fact that their members came from very different exonomic structures. In the past, the distinction between sheepherders and non-sheepherders existed in all developed Vlach settlements of Pindos, and could possibly be concealing, in a latent form, the socioeconomic reality of past times. This was not a class distinction based on wealth, since in most cases the members of both groups belonged to the poorer segments of the population, but a differentiation related to the establishment of the settlements during the Ottoman period, which produced the co-existence of populations with the same linguistic base but with clearly different economic and social structures.

Karye-iMiçova denoted the tax district of the Ottoman timar that constituted the area of Metsovo. Six settlements are recorded in it. Each settlement’s name is preceded by the indication “karye” and usually followed by the phrase tâbi‘-iMiçova meaning “subject to Metsovo”.

The word karye, as a term in the organizational structure of the Ottoman Empire, defined a settlement or a group of settlements constituting a unified tax district. In the Greek language it is usually translated by the word “chorion”. However, it does not correspond to the term “settlement” as used in modern statistical terminology, but rather to “community”. In other words, it does not signify a group of buildings, but a well-defined geographical area with a self-contained legal entity. A karye could include more than one settlements regardless how far apart they were from each other.

In the 1506 census, Karye-iMiçova is followed by the phrase “tâbi‘-i Τirhala” meaning “subject to Trikala”. The names of eight settlements appear in it. Before the name of each settlement, the indication “karye” of the 1454–55 census has been replaced by “mahalle”. The specific administrative structure of the area constituted the basis for its administrative organization in the centuries to come. In administrative documents of the 18th century, the present settlement of Metsovo is termed “chora” and the other villages as “mahalades”.